Unquestionably a fashion statement, leather jackets may catapult you into the spotlight right away. Our handsome male celebrities appear to understand this reality because they are usually photographed donning fashionable leather jackets decorated with metal studs. This is especially true with leather jackets with spikes and studs, which eloquently convey their rebellious fashion sense, edginess, and badass emotions.

We may learn a lot about how to wear these punk/rock style leather jackets with full panache from various hot celebs. In order to effortlessly duplicate their styles, make sure your leather jacket with studs fits you well. Keep in mind that you would seldom ever see a celebrity wearing an ill-fitting jacket.

The Eye-Catching Studded Leather Jackets Are Everything
The diversified fashion era of the 1970s is where studded jackets first appeared in American fashion history. The practice of donning studded leather jackets to project a distinctive and flamboyant appearance originated with the punk fashion trend.

The leather jacket has intricate, swanky details in the form of little or large metal studs and spikes in various sizes. Nothing is better than sporting these hip, alluring coats while trying to create a great look. This explains why we are captivated by the handsome celebrity men who are donning gorgeous men’s motorbike jackets with studs all over them.

Styling Leather Jackets with Studs
During photo sessions, events, stage performances, and other public appearances, well-known figures from the entertainment sector like to wear studded motorcycle jackets. Unquestionably, whatever celebrities choose to wear becomes the undisputed dress code in modern fashion, which explains the frenzy around these punk-style jackets, which is quite warranted.

In addition to the well-known Hollywood actors, singers and athletes are also not far behind in the race of repeatedly flashing their studded jackets. In reality, musicians more often use them to express their admiration and inspiration for the well-known rock and punk performers of prior decades. Here are some of our favorite male celebrities who always manage to pull off studded leather jackets. 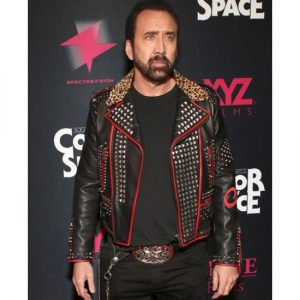 Nicolas Cage Out Of Space Jacket

The winner of the Academy Award deserves to be at the top of this list. He is not only a really skilled actor, but he also has a great sense of style, which contributes to his enormous fan base.

Cage is particularly well-known for his stylish appearances in leather jackets, which includes one of his biker jacket styles with studying. He chose a dramatic black motorcycle jacket with bright red trimming and front, back, and sleeve metal stud accents. The leopard print collar of this jacket was a great detail. The basic pairing of black trousers and a black round-neck t-shirt that Cage used to style this jacket. He had a nice leather belt with a large metal clasp to amp up the gritty vibe.

The King of R&B has had a significant impact on American music as well as design trends. Chris Brown has a flawless understanding of how to wear leather jackets.

His remarkable appearance in a studded leather jacket made a bold statement about fashion. The jacket stood out from the others because of its patches, metal studs, and blue lapel. The rapper styled this jacket by pairing it with low-rise blue denim and a black graphic t-shirt. The usage of a baseball cap and large gold neck chains raise the outfit’s stylish quotient.

The main vocalist of BTS, Park Jimin, is a style icon across the world. As a real fashion hero, Jimin is renowned for defying gender norms with his attire and preference for leather jackets.

Jimin does an outstanding job at styling studded leather jackets. He once donned black pants, a black t-shirt, and a bomber jacket with studded buttons. It only needed a red leather belt and some metallic accents to appear striking. 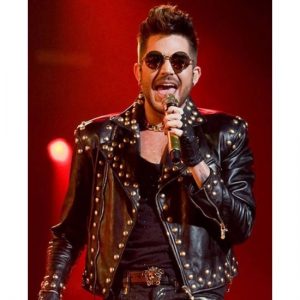 Adam Lambert, a well-known American musician, and songwriter caused a stir with his very edgy studded leather jacket appearance. He wore a black vest, skin-tight leather leggings, and a gold studded jacket. This outfit had real rockstar feelings thanks to the usage of standout accessories including fingerless leather gloves, a belt with a gold clasp, and gold chains.

A Conclusion
One of the best pieces of apparel that exude bad guy vibes is studded leather jackets. We have noticed that all of the celebrity appearances in studded jackets are elevated by their extravagant use of hefty belts and jewelry. However, it is entirely up to you whether you want to dress it simply or accentuate the statement with other accessories.